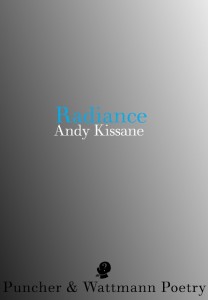 Radiance is a book firmly grounded in the reality of contemporary life, yet lit by empathy and humour. Kissane ranges from the self-immolation of a Buddhist monk to a sailing trip on Sydney harbour with Percy Shelley to the celebration of an enduring relationship with The Moon. Lyrical, moving and surprising, these poems are warm and shining creations.

“This is daring and imaginative poetry. The poems in Radiance are clever, funny, tender and knowledgeable with an uncluttered clarity of thought and feeling that is very appealing. They are unafraid to go where they need to go. The last long sequence is a delight.”
—Brook Emery

“It’s rare for such empathy to coexist with supple poetics of this calibre. Mark Doty says a great poem requires the poet to build, with the raw material of experience, a vessel strong enough to contain its emotion. Kissane is such an artisan: the poems in Radiance are beautiful,  watertight vessels that are full to the brim. Drink deeply.”
—Judy Johnson

“Kissane’s work is magnetic and uplifting. It is a poetry charged with great breadth of emotion and diversity of image. There is tremendous variety to his narratives and poem after poem is crafted to excellence. He is a delight to read and to listen to, and gave a riveting performance at Ó Bhéal, Cork.”
—Paul Casey

Radiance shortlisted for the 2015 Victorian

His poems are variously populated by literary characters and creators (Keats, Dylan Thomas, Virginia Woolf), children who work as street vendors in Mexico or garbage foragers in Phnom Penh, and Australian suburban dwellers. Subjects include love, sex, parenting and childhood summers, as well as exercises in political and literary ventriloquism, as Kissane imagines himself into lives and worlds very different from his own.

“The book discovers radiance and human endurance in a world of compromise and betrayal, and celebrates imagination’s wild joy,” writes John Upton for Cordite.

This is an emotionally charged, technically accomplished collection, rich with compassion and engagement.

Radiance is a perfectly titled collection – these poems shine with the wit and emotional warmth of Andy Kissane’s writing. His power of poetic narrative sets up a fine balance between acuity of detail and action. People, places and events are portrayed with a calm yet unexpected strength of compassion, rich with intertextuality and intimacy.

Kissane is a masterful storyteller, playfully creating a dialogue between the poems and figures such as Virginia Woolf, the poets Keats and Shelley and even the characters of Tolstoy. These are lively and highly accessible poems, unhurried, unfussy and extraordinarily generous. The reader comes away uplifted.

Another poet who works the material of the ordinary is Andy Kissane, though with a somewhat different inflection. Beginning with the premise that the familiar is as strange and necessary a subject as anything arcane or unheimlich, his poems draw variously on his daily experiences and on the somewhat less ordinary lives he encounters in books. They invariably display a strong sense of context (Kissane is a short-story writer as well, and there is some overlap between his poems and stories, in terms of technique): a boilermaker, new to the theatre, gets sucked into the action, watching his son on stage; a couple of match girls giggle under the bedclothes at the way the phosphorous makes their teeth glow. The poems are often driven by a sense of injustice: ‘The Smell of the Sea’ is about an ex-RAAF maintenance worker who has developed cancer from performing his duty, cleaning the fuel tanks of F-111s. Elsewhere he honours the people with whom he shares the familiar. There is a sequence of love poems for his partner, for example, and a poem about driving his daughter to ice-skating, and watching her practise:

I can see her as she concentrates on the long backward

glide, digs her toe pick down into the ice, lifts

and spins into the air, striving with her whole body

to land this difficult jump for the first time.

Sometimes he is a slightly comic figure (‘I perform a role / crucial for adolescent wellbeing: efficient driving,’ he writes in ‘Trip to the Ice Rink’), though there is a steely note to this, as if he were insisting that he was serious about his loyalties. In ‘Buddy Holly at the Hi-D-Ho’ he criticises Holly’s songs for always writing about a love that is either ‘further down the road,/ or shining in the past’. ‘What really kills love,’ he says, ‘is expecting your baby / to stay up on the Hi-D-Ho roof / in a white suit. Let him come down / onto the tarmac. Let him write / a different type of love song.’ There is something of Kissane’s poetic in this. He wants emotion to engage with the present and familiar, rather than for it to be situated solely in elsewheres of lack or desire. This is not as straightforward as it sounds. Poetry has, for various reasons—most of them genuine, some of them career-based—congregated in recent times at the frontiers of our understandings and techniques. But that can mean it has little to say about the quotidian, as if anyone with any sophistication already knew everything one needed to know about such things—above all, that it would be uncool to revisit them.

One can appreciate the need to push the boundaries, but it has been a big call for us as a culture to have walked so comprehensively away from the life in front of us. Without disputing the need for experiment in writing, the experimental can struggle to engage with daily life on an emotional level. And sometimes the intellectual perspective has permitted a dismissal I am not sure anyone is entitled to make. It is a dismissal that Kissane has refused. At the heart of his project is a desire to honour and celebrate contemporary joy—sometimes peripheral and barely glimpsed, sometimes central to his characters’ lives—and by so doing, run an implicit counter-argument to those who see the world only in terms of its insufficiencies. Rather than the marvellous being the province of a few remarkable minds, for Kissane it is everywhere—though even the mundane is a frontier that must be grappled with, again and again:

As usual, I drink too much wine

and the solar system seems so immense that I

can almost comprehend it. Ah, we’re living out

the words of a popular song. But which one?

Andy Kissane’s fourth collection, Radiance, is a heartening answer to those who, like publisher Stephen Matthews, lament that ‘many modern poets choose to shroud their work in point-scoring obscurity at a time when clarity and accessibility might encourage more people to read poetry’. Kissane doesn’t address this issue directly, but his book is an important negative instance.

The first virtue of Kissane’s poetry here is its empathy, which leads on to an important (though sometimes unfashionable) political dimension; the sonnet ‘Match Girls, 1888’ is a telling example. Two young sisters in a Dickensian match factory begin to notice what is happening to the other girls: the damaged jawbones and bleeding gums. The ending is disturbingly poignant: ‘One / mustn’t complain. Instead, she poked her sister / under the quilt and they laughed at their teeth – / glowing green and ghostly in the warm cave of the bed.’Similar compassion and outrage can be found in a number of neighbouring poems, particularly ‘The Street Vendor’s Lament’, ‘The Child is Father of the Man’, and ‘The Smell of the Sea’. All deal with dangerous working conditions, and all make their point with technical subtlety and an absence of rhetoric.

What helps to make these poems even more memorable is the way the book’s remaining sections display, by contrast, a complementary and characteristically playful imagination. Part II , for instance, features dreamlike encounters with John Keats and Percy Shelley. Dylan Thomas and Virginia Woolf are given similar treatment. All the poems suggest much about each writer’s work and personality.

In Part III , politics returns – with sometimes heartbreaking strength – as in ‘My Husband’s Grave’ and ‘Against Forgetting’, both of which deal with extreme political courage. Again, these poems are surrounded with lighter, more personal, even nostalgic ones.

Similarly, in the book’s final section, ‘The Sea of Tranquillity’, Kissane adopts the ancient technique of personifying the moon to ludic and lyrical extremes – yet stops well short of the sentimental.

Sometime in June or July, throw on a cable-stitched

grey jumper or even a thick coat for warmth,

take the afternoon off and head out past Kurnell

to Cape Solander. There, on the white sandstone cliffs

above the vast flood, look for humpbacks

heading north, swimming near the shore

the corrugated whiteness of its wobbly ascension,

the dark certainty and blazing glitter of its fall.

until it’s as messy as an unmade bed, it tugs

at the waving tendrils of spear grass and at the tips

of your ears, it makes your eyes water

as if some old sadness has unexpectedly taken hold.

You can find no sign of a sea eagle, hovering;

you cannot name the endangered species

growing in this headland heath. But you can close

your eyes, you decide to do this simple thing,

electing to completely miss the whale if it rises again,

going on around you, within you, as the buffeting,

lunging wind picks you up and gives you wings.