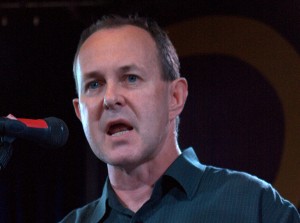 1. Do you remember the name and personality of the first character you ever created?
What springs to mind is a series of laments I wrote last century, set on different islands. The first one was written in my voice, based on a visit to Taquile Island in Lake Titicaca, Bolivia. The people who live there are Uros Indians, descendants of the Incas and they run the whole island as a cooperative. It’s a lament about the limitations of tourism, about not being able to stay there long enough or fully understand the culture without a shared language. The second lament, ‘Leaving Inishmore’ is written in the voice of an Irishman who is cursing the arrival of tourists and foreigners; while the third, ‘On Sarah Island’ is written in the voice of a convict transported to Macquarie Harbour, Tasmania. I guess rather than a name, or a personality, which seems an intimidating thing to create from scratch, my way into character has often been through voice. It’s through the speaking voice of a character that I began to write narratives, in both poetry and fiction.

2. What drove you to write the story which is in the Michael McGirr Selects series?

Initially, Love Bites was motivated by a desire to write about a strong woman, a scientist. I was interested in how difficult it is for women to pursue a career in science, how so many fields of scientific research are dominated by men, how women had to overcome discrimination and sexism, as well as the everyday challenges typically faced by working women. I was attracted to malaria because the search for a viable vaccine has been going on for at least thirty years now. As I wrote the story, I realised that the scientific journey wasn’t really enough. I’m a firm believer in the adage that you often need more than one idea to make a story work, and the relationship between the mother and the daughter gradually started to become the focus of the story. I’m working on a short story cycle about three women who are friends—Anna, Svetlana and Penny. I already had some notion of the Anna’s character from a previous story, but she’s much younger in Love Bites, which was interesting, as I travelled backwards rather than forwards in the creation of a character’s life.

3. How do you approach a new story? With a clear plan of where the narrative is going, or is it more of a ‘well, let’s see how this goes’ kind of approach?

I never have a clear plan at the beginning. I often wish I did, but I tend to just start with an idea that interests me, like a scientist working on a malaria vaccine, a woman waiting for a man to propose, or two children living in a garbage dump in Phnom Penh. I think over-planning limits the capacity of intuition to do its job, that gut impulse that takes the story in a direction that is surprising. In the end, trial and error is the only method I use. If the story works it’s great; if it doesn’t, then I try to think through what might work instead, but the answer is almost always more gut instinct that anything logical.

4. Is there one particular author or book that you look to as a source of inspiration for your own writing? What are you reading now? Any recommendations? 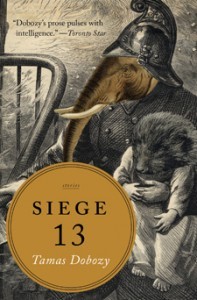 I believe that writing comes from other writing, as well as an openness to the world, so reading is a crucial part of the process. Recently, I’ve been impressed by two stories that deal with the subject of trauma, and it is now a subject I want to write about myself. The Canadian writer, Tamas Dobozy has a story in Siege 13 called ‘The Animals of the Budapest Zoo, 1944-45’. It chronicles the experiences of the zookeepers during the siege of Budapest at the end of the Second World War. The story has elements that you might describe as magical realism, yet it is a magic that develops credibly out of physical and psychological trauma. Siege 13 is a short story cycle built around the siege of Budapest and the experience of ex-pat Hungarians in Canada in the years after the war. As a form, I’m very interested in the short story cycle, not just because I’m trying to write one, but because of the way that the short stories work on their own, yet also contribute to a whole that is more than the sum of its parts. I think it’s a pity that really wonderful short story cycles like Jennifer Egan’s A Visit from the Goon Squad and Elizabeth Strout’s Olive Kitteridge have been marketed as novels. They’re not novels, I want to argue, but I guess this is one genre war that the marketing departments are winning. 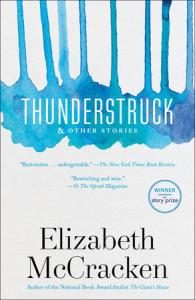 Elizabeth McCracken’s ‘Thunderstruck’ in Thunderstruck and Other Stories dramatises the heartbreak of a family whose precocious and rebellious teenage daughter has an accident while drinking with boys. The story is centred around the father-daughter relationship and uses painting in a way that seemed original to me, and was also profoundly moving. ‘Thunderstruck’ is a searing and unforgettable story, a towering achievement in a collection that is consistently impressive and thoroughly engaging.

But perhaps the book that has impressed me the most recently is Joan Wickersham’s, The News from Spain: Seven Variations on a Love Story. Another short story cycle in which seven distinct stories have the same title: ‘The News from Spain’. In one story the news from Spain is what a character hears in a shell that has washed across the Atlantic Ocean; in another a woman receives a telegram from Spain informing her that her lover has been killed in a racing car accident. Although this trope gives the collection unity, what really unifies this book is Wickersham’s unfailing ability to write love stories—usually love-gone-wrong stories—that are psychologically astute, absolutely compelling and that feel ‘new’. This is a book about contemporary adult relationships, and reading it, I was blown away, not just by Wickersham’s understanding of people, but also by her capacity to craft stories that pulse and vibrate with life. Wickersham’s short story cycle deserves to be news—I cannot recommend it highly enough.

5. How does writing fit into your day-to-day life? Do you have any unusual writing habits? Any advice to share for those stuck in a writing slump? 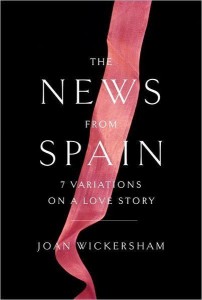 I tend to put off starting because writing is hard. I’m also not much of a morning person. I tend to write best when I’m in the rhythm, so I try to write whenever I’m not doing paid work. Some days are just horrible, but I’ve learnt over the years that if you tough it out, then good things can happen. Motivation is key—if you’re not particularly motivated, it’s hard to write and there’s no boss standing over you to make sure you do it, at least in my house there isn’t. Writing both poetry and fiction helps—if I’m bored with fiction, I can switch to poetry and vice versa.

I don’t really believe in writing slumps or writer’s block. I believe in what Lorrie Moore said in that wonderful essay of hers, ‘Better and Sicker’, that there is only ‘the sick devotion to the work.’ Moore suggests: ‘Better to think of writing, of what one does as an activity rather than an identity—to write, I write, we write; to keep the calling a verb rather than a noun; to keep working at the thing, at all hours, in all places, so that your life does not become a pose, a pornography of wishing.’

For me the hardest thing is the first draft—pushing through the first draft is a bit like tunnelling through rock and hoping to eventually come up into the light at the other end. After that is done, revising is fun, it’s a form of play, probably because I’m in love with the rhythm of sentences and the beauty of words.